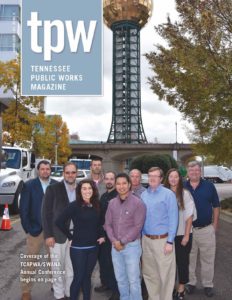 The Lebanon Gasification Initiative has received the 2017 Project of the Year honors from the Tennessee Chapter of the American Public Works Association. By Scott McRae, manager of the Lebanon Gasification Initiative

The Lebanon Gasification Initiative has received the 2017 project of the year honors from the Tennessee Chapter of the American Public Works Association (TCAPWA).

This award recognizes a project in a Tennessee city that epitomizes outstanding planning, construction, and management. This project becomes the Tennessee Chapter’s nomination to the National APWA Top Ten Projects of the Year. It was announced at the TCAPWA Annual Conference recently held in Knoxville. At the heart of the Lebanon initiative is the world’s largest downdraft gasification plant designed and built by Aries Clean Energy.

There are several positive outcomes because of the plant that reach far outside the city limits. Hundreds of visitors from all over the world have trekked to Lebanon to look and learn more about renewable energy at the plant site. Local industries and educators have found that the renewable energy plant can also play a part in helping them become better environmental stewards.

“This kind of recognition spotlights how much teamwork it takes to build and implement a project like this,” said Mayor Bernie Ash. “It is rewarding to see how a public private partnership can work together for good. And the fact that educators and local industry can also benefit because of this plant is just fantastic!”

This marks the fifth industry award for the innovative plant. Earlier in 2017, the plant received honors from: the State of Tennessee Governor’s Stewardship Award and Project of the Year accolades from Environmental Leader and Industrial Wastewater Digest. The Greater Nashville Regional Council presented the 2017 Local Government Award for Public Works & Utility Infrastructure to the city last month.

Like many cities this size, Ash says tackling the solid waste issue is best done taking one step at a time. He sees this renewable energy plant as the first step toward a total material recovery facility line for the city’s waste. “I’m pleased to say that with the detailed planning initiated by Aries, construction and implementation have progressed very smoothly. As with any power plant, we’ve had some bugs to work out, but overall, it’s been a great team-building experience,” said Ash. Randy Laine, Engineering Director, and Mayor Bernie Ash with the Project of the Year Award.

According to Lincoln Young, Chief Operations Officer of Rockwood Recycling, since the start of wood waste collection to use as feedstock for the Lebanon Gasification Initiative, three local companies combined have diverted 3,025 tons of wood from local landfills during the past year. That’s the equivalent of keeping 945 tons of carbon emissions out of the atmosphere or the greenhouse gas emissions from 673 passenger vehicles driven for one year according to equivalents set up by the Environmental Protection
Agency. More than a dozen local businesses are currently participating in the program with Rockwood, a major component of the public/private partnership surrounding the Lebanon plant.

One example is the Carlex aftermarket distribution center in Lebanon that specializes in automotive replacement glass and produces original equipment glass, such as laminated windshields and performance backlights. Carlex is a subsidiary of Central Glass.

A product like automotive glass requires special packaging during storage and transport. Until 2016, the thousands of custom wooden crates were used once before heading to the landfill. When facilitating production and logistic activities, waste streams always pose a challenge, according to Lynda Hogue, director of the aftermarket distribution center.

Carlex’s array of products intensifies this issue, she added. The plant generates a multitude of crates, cardboard, wood pallets, racks, packaging materials and more from the manufacturing and distribution processes. In addition, millions of pieces of glass per day are transported and distributed.

Currently the University of Tennessee Institute of Agriculture is engaged in the study of Lebanon’s biochar in five different areas of the state. Biochar is the carbon-rich product that is left over after the completion of the gasification process. For example, for every 100 pounds of wood that is gasified at the plant, the city gets 95 pounds equivalent of producer gas that is used to generate electricity, and 5 pounds of carbon-rich biochar is left over. Associate Professor of Biosystems Engineering and Soil Science at the University of Tennessee Dr. Forbes Walker is heading up the studies. Biochar can be used as a soil enhancement because its carbon properties capture and hold water that leads to deeper roots and increased growth.

The effects of different amounts/concentrations of biochar on the growth of fescue is underway in Wilson County. Biochar from the Lebanon plant containing 10% biosolids from the wastewater treatment plant was weighed and spread by hand on the one-third-acre test area. The first fescue harvested and soil sampling took place last summer. There are also control sites with no biochar added. There are areas where urea (fertilizer) only was added. The weight amounts are to simulate the tonnage per acre that will be needed.

Walker thinks this type of study is unique in the biochar world. He cannot find where anyone has done research. He hopes when the results are in, he will be able to tell a farmer how much biochar to use on his fields to achieve a specific result. For example, if a farmer is primarily a cattle farmer, he will want to use the combination that produces the most protein in the fescue. A local dairy farmer in Wilson County has agreed to use the Lebanon biochar in his manure storage pit. He is anticipating that the biochar will not only act as a filter but also accelerate the breakdown of the manure and control the odor. The first application is set to take place in December 2017.

The University of Tennessee at Knoxville team has received a grant to research the use of the Lebanon biochar in a chicken broiler house in Bradley County as a means to control odor and act as a filter. To date, the biochar has only been on site for three weeks. It is hoped that the biochar may be part of the solution for the growing ammonia problem and bacteria issues in chicken houses. Then, at the end of the growing season, all the leftovers are windrow composted. The addition of biochar speeds up the composting process by several days because it takes in the moisture. Chickens sometimes eat the biochar but it does not harm them.

Funding from the U.S. Department of Agriculture is making possible the testing of Lebanon’s biochar versus sawdust as a flood water deterrent in three West Tennessee locations. The Ames Plantation in Fayette County as well as sites in Madison and Gibson counties are being earmarked for this testing.

Ames Plantation, home of the National Field Trial Championship for All-Age Bird Dogs, is privately owned and operated by the Trustees of the Hobart Ames Foundation as Successor Trustees under the Will of the late Julia C. Ames.  Ames Plantation also functions as one of the University of Tennessee’s AgResearch and Education Centers. Dr. Forbes Walker, Associate Professor of Biosystems Engineering and Soil Science at UT Knoxville, is heading up a study of the effects of biochar on fescue at the UT Agriculture Extension office located near the fairgrounds in Lebanon. For the recent distribution of the biochar, he assembled a diverse group of volunteers from five different countries. Pictured on the back row are Logan Helstein (Wilson County) and Manuel Avalos (El Salvador) both from Rockwood Recycling, and Walker (UK). On the front row from the City of Lebanon, Scott McRae and Jesse Gillam, Dr. Sindhu Jagadamma (India and also on staff at UT Knoxville), and UT Knoxville graduate student Xiuwen Li (China).