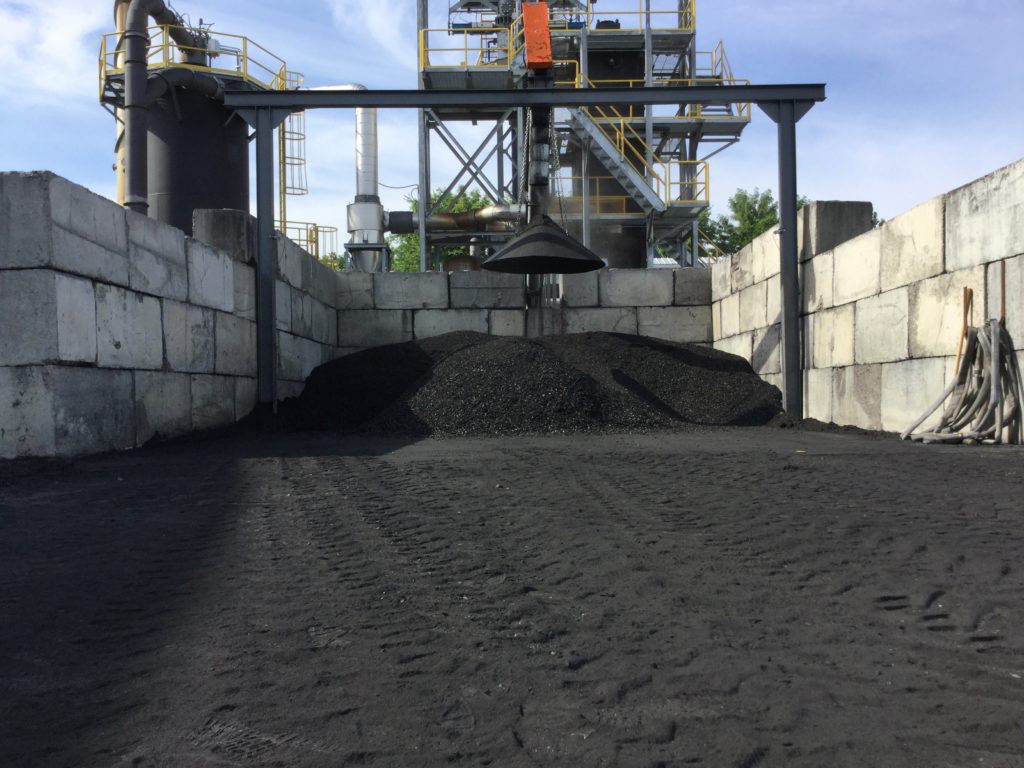 “Biochar can and should be used as a soil enhancement because its carbon properties capture and hold water that leads to deeper roots and increased growth” - Dr. Forbes Walker, Professor of Biosystems Engineering and Soil Science at the University of Tennessee Knoxville While planning for future growth, the City of Lebanon’s mayor and council were looking for a “green” way to address the growing municipal solid waste issues. The closest and largest landfill, just in the next county, was (and still is) filling up fast and expecting to close in a few years. Lebanon, Tennessee, USA, is located 25 miles east of downtown Nashville.

The city engaged Aries Clean Energy as a first step toward being more independent with its waste disposal solution. Aries proposed a downdraft gasification plant that would use waste wood and biosolids from the wastewater treatment plant for its fuel, diverting wood waste and biosolids from the landfill. The plant would generate enough electricity behind the meter to offset a third of the city’s wastewater treatment plant’s energy bill.

And while the city and environment enjoy this new resource, its only byproduct — biochar — still has yet to find a home. For every 100 pounds (45kg) of feedstock, 15 pounds (7kg) of biochar is left over from the process. But as a song says, we are starting to get by with a little help from our friends. Signs mark the boundaries of the test site located in Wilson County, Tennessee

The University of Tennessee Institute of Agriculture (UTIA) is based in Knoxville, Tennessee (about 150 miles from Lebanon) but serves communities and stakeholders across the state. The university has been studying Lebanon’s potential uses for biochar at different sites across Tennessee. Dr. Forbes Walker is heading up the studies with the assistance of colleagues, staff and graduate students. Walker says biochar can and should be used as a soil enhancement because its carbon properties capture and hold water that leads to deeper roots and increased growth. Walker is Professor of Biosystems Engineering and Soil Science at the University of Tennessee. With his help, it is hoped that the Lebanon biochar will find a permanent home helping bolster local farms and crops. Let’s take a look at what is currently in progress. The frowning doctor poses with the untreated field to show the height and physical differences.

Soybean and cotton progress worth a thousand words

With funding from the Tennessee Department of Agriculture, UTIA research is looking into using biochar as a soil amendment to soybean and cotton fields at three locations in west Tennessee this season. The fields at these sites have been inundated with sandy deposits following recent floods, making the sandy parts of the fields uneconomic to farm. Two pictures seen here were taken in August, and they show the impact the biochar has made on plant growth through improvements in the soil’s physical, chemical and biological properties. It is easy to see that the biochar soybeans are taller and contain a higher number of larger leaves than the non-biochar field. Additional data is expected after harvest. So, depending on the outcomes, it is hoped that biochar will help farmers increase yields and make these flood-prone fields economically viable for agriculture.

Tall fescue is the most commonly used grass for beef cattle production in Tennessee and the southeastern USA. The effects of different rates of biochar applied to an established pasture on the growth of tall fescue is being investigated in Wilson County (where the Lebanon plant is located). Biochar from the gasification plant was weighed and spread by hand on the one-third-acre test area. The first fescue harvest and soil sampling took place last year and again this year. There are also control sites with no biochar added. No yield differences have been observed between the different rates of biochar used on the production of fescue in the first couple of seasons. Differences in the soil chemistry are emerging with increases in the soil’s phosphorus and potassium — both of these elements are essential for plant growth. It is anticipated that a yield response can be expected during years with below-average rainfall. A smiling Dr. Forbes Walker stands in the treated field.

Walker thinks this type of study is unique in the biochar world. He cannot find where anyone has done research like this. He hopes when the results are in, he will be able to tell a farmer how much biochar to use on his fields to achieve a specific result. Walker hopes to publish results after this growing season ends and soil sampling is complete.

Reducing water use in the nursery industry

Work by University of Tennessee graduate student Nastaran Basiri Jahromi, has demonstrated that hardwood biochar can be used to replace part of the growing media used to produce container plants in Tennessee. Her work looked at using up to 25% biochar in a pine-bark growing medium to improve the water holding capacity and greatly reduce irrigation needs. The results show that — for hydrangeas grown in a greenhouse — 32 to 72% less water was needed.

A local dairy farmer in Wilson County has agreed to try using the Lebanon biochar in his manure storage pit. He is anticipating that the biochar will control odours, but also reduce nitrogen losses from the manure, as well as reduce the potential for phosphorus to runoff after land application on crop fields. It is anticipated that this project will start in early 2019.

The UTIA team received a grant to research the use of the Lebanon biochar in a chicken broiler house in Bradley County as a means to control odour and act as a filter. It is hoped that the biochar may be part of the solution for the growing ammonia problem and bacteria issues for chicken growers. Then, at the end of the growing season, all the leftovers are windrow composted. The addition of biochar is hoped to speed up the composting process by several days because it takes in the moisture. Chickens sometimes ingest some of the biochar, but it does not harm them.

For more information: This article was written by Dr. Forbes Walker of the University of Tennessee’s Institute of Agriculture and Nancy Cooper, Communications Manager of Aries Clean Energy. Visit: www.ariescleanenergy.com Dr. Forbes Walker, Associate Professor of Biosystems Engineering and Soil Science at UT Knoxville, is heading up a study of the effects of biochar on fescue at the UT Agriculture Extension office located near the fairgrounds in Lebanon, TN. For the recent distribution of the biochar from the Lebanon renewable energy plant, he assembled a diverse group of volunteers from five different countries. Pictured on the back row are Logan Helstein (Wilson County) and Manuel Avalos (El Salvador) both from Rockwood Recycling, and Walker (UK). On the front row from the City of Lebanon, Scott McRae and Jesse Gillam, Dr. Sindhu Jagadamma (India and also on staff at UT Knoxville), and UT Knoxville graduate student Xiuwen Li (China).